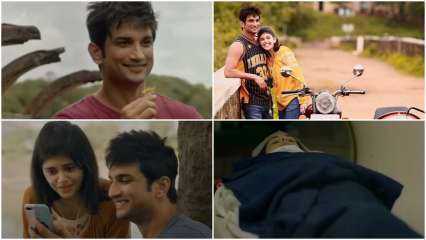 Today the makers released the trailer of Dil Bechara, which marks the debut of Sanjana Sanghi and also is Sushant Singh Rajput’s last film ever. Fans have been eagerly waiting for the trailer of Sushant’s film which is all set to debut on the OTT platform on July 24 and will be free for everyone to watch in memory of Sushant. The trailer released today and will give you all the feels as you take in Sushant’s magnetic screen presence in, one last time.

The trailer starts with Sanjana Sanghi introducing her character Kizie and how she has been battling cancer and that is when as a ray of hope, light, and love Sushant’s character Manny comes into her life. The trailer starts and ends with a beautiful note which is “love makes everything okay”, or how they say in the film “seri” which means okay in Tamil.

The trailer is sure to make every Sushant’s fan emotional but at the same time, he also makes you smile and dance with him which speaks volumes about his screen presence and his reach as an actor. There is a dialogue in the film said by Sushant which is especially heartbreaking when he says “Janam kab lena hai aur marna kab hai, hum decide nahi kar sake (We cannot decide when to be born or when o die)”.

Previously titled ‘Kizie Aur Manny’, ‘Dil Bechara’ is the Hindi adaptation of ‘The Fault In Our Stars’. Directed by Mukesh Chabbra, who was previously a casting director, the movie marks Sanjana Sanghi’s debut in Bollywood. ‘Dil Bechara’ also features Saif Ali Khan in a pivotal role. The movie is slated for release on July 24, 2020, on Disney+Hotstar.