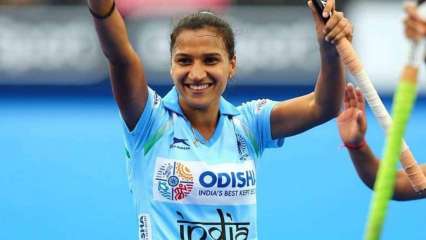 “Was it true that I am getting the Khel Ratna? Am I dreaming?” These were the first reactions of Rani Rampal, the captain of the Indian women’s hockey team when her name was announced for the Rajiv Gandhi Khel Ratna award, the highest civilian honour for a sporting personality in the country. Rani sought even more confirmation, asking three to four people as to whether this was true. When the confirmation came, Rani did not want to cry.

In an exclusive interview to DNA on the eve of getting her Khel Ratna award, Rani said that all the struggles came flashing before her eyes and that is why she just could not control her emotions. “I was just simply overwhelmed. Perhaps, I reflected on the struggles that I had to undergo to get to where I am today. It suddenly came in front of my eyes. The tough start and now getting the Khel Ratna is my biggest achievement,” Rani said.

Her tears were an apt summation of how an individual sportsperson, away from the glamour of cricket, has to struggle to get to the pinnacle. She was thrown out of the junior camp in 2007 and many said that she can never play for India. Without a proper diet, the future seemed bleak for Rani. However, through sheer guts and determination, 241 international games later, Rani has achieved her first goal. Her second, though, is even more ambitious.

‘Can still do well in Tokyo’

The coronavirus pandemic postponed the Tokyo Olympics to 2021. The announcement was devastating for the Indian women’s hockey team as they had built momentum for the games through some solid performances. The 2018 Asian Games silver medal, the performances against the USA in the Olympic qualifers in Bhubaneswar all pointed to something big in Tokyo, which was a medal for the women’s team.

Rani said that initially the announcement was hard to take but now they are focused on getting back to the same level of intense training and momentum. She also pointed out that the perception of Indian hockey, especially women has changed in her lifetime.

“It is a great sign for Indian hockey. We have done well and consistently in the last 3-4 years. The Asian Games silver and the Olympic qualifiers against USA. We cannot do anything in the time of the coronavirus as it is out of our hands. We will only focus on what we can do. How do we get the same momentum, mindset and training prior to the games is what we must focus on,” Rani said.

Rani hails from Shahabad Markanda, a village about 22 kms away from Kurukshetra. It is in the state of Haryana, in a place where women face an uphill battle for recognition and equality. The mindset in Haryana, highlighted by Rani, stressed on having a job, an India berth followed by marriage. There was intense pressure of tying the knot for Rani but one person understood her ambitions and supported her in every move. Rani stated that it was her father, Rampal, who ensured she did not fall prey to the prevalent mindset.

“My father has motivated me a lot. He always believed me. Many people have often told him that ‘Your daughter has a job, she is playing for India. Get her married.’ However, he was the only one who understood me and said that she wanted to do something in life. In Haryana, especially in the villages, everyone thinks that once you get a job and pay for India, life is settled and it is done,” Rani said.

Apart from her family, Rani credits her team-mates and especially the physio for making her pain-free in the last couple of years. The India women’s hockey skipper had been playing through pain for some time but her enhanced levels of fitness has seen her help India scale new heights.

“My friends, coaches and the players who are in my team now and before have thought me some new things in life. Some player inspires me to do well. I am thankful to the trainer and physio for making me injury-free. I have been playing through pain and injury for the last couple of years but the trainer and physio’s dedication ensured I gave my best,” Rani said.

Rani had won the prestigious World Games Athlete of the Year award at the start of 2020, making her the first-ever hockey player to achieve this feat. Her reaction on getting the award was “like a film star”. Now, with Rani becoming the first-ever female hockey player to get the Khel Ratna award, the 12-year journey of Rani from a tough start to top of the mountain has gotten only better. If she gets a medal for India in Tokyo, then who knows, maybe the Bharat Ratna?

Mathura: After days of closing due to overcrowding, the Banke Bihari...
Read more
- Advertisment -