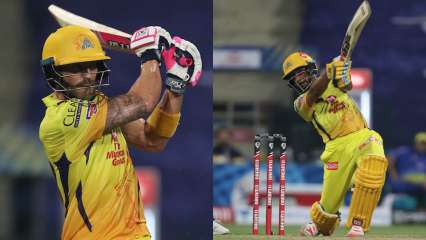 Chennai Super Kings (CSK) kick-started their Indian Premier League (IPL) 2020 campaign with a dramatic victory over arch-rivals Mumbai Indians on Saturday (September 19). With this win, CSK also ended their run of losses against the Mumbai side from last season.

Earlier in the day, CSK skipper MS Dhoni won the toss and opted to bowl first.

Batting first, Mumbai Indians went on to post a respectable total of 162 runs with the loss of 9 wickets. Saurabh Tiwary was Mumbai’s standout batsman in their lineup as he played a progressive 42-run knock on the day.

On the chase, CSK lost their opener, Shane Watson, in the first over as Tent Boult struck for MI. Right after, James Pattinson sent Vijay back to the dressing via LWB with excellent delivery.

However, Ambati Rayudu (71) and Faf du Plessis then took the charge and formed a formidable partnership between them.

The pair also knitted together a 50+ run partnership as Rayudu brought up his 19th IPL half-century before Rahul Chahar sent the batsman back to the dressing room.

Sam Curran came in and played an explosive knock of 18 runs at the end of 6 balls.

MS Dhoni did come out to bat but remained unbeaten on zero after facing 2 deliveries as du Plessis (58*) guided CSK to their opening day victory in Abu Dhabi by 5 wickets in the end as they finished on 166/5 with 4 balls to spare.

This was also MS Dhoni’s 100th win as the CSK skipper in the IPL. Chennai’s next match is against Rajasthan Royals on September 22.