IPL 2020: Nothing Lockie about Ferguson as KKR defeat SRH in Super Over 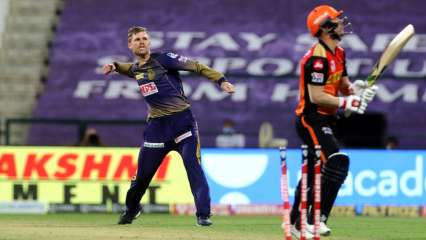 Lockie Ferguson powered Kolkata Knight Riders (KKR) as they defeated Sunrisers Hyderabad (SRH) in the Super Over in the 35th match of the Indian Premier League (IPL) in Abu Dhabi.

After SRH tied the match on the 163 runs scored by KKR, Ferguson did not all the batsmen in the Super Over to score any runs as they were dismissed 2 for 2. David Warner and Abdul Samad were both bowled.

2/2 is the joint-lowest Super Over score in IPL equalling Kings XI Punjab (KXIP) against Delhi Capitals (DC) earlier in the season. Eoin Morgan and Dinesh Karthik came in and scored the required three runs despite Rashid Khan’s efforts to curb them.

The Kolkata franchise were sent in to bat first and captain Eoin Morgan and Dinesh Karthik combined to score 58 runs in the last five overs to take their team to 163/5 in 20 overs.

Morgan was dismissed off the last ball of the innings for 34 off 23 balls while Karthik was unbeaten on 29 off 14.

Shubman Gill was the highest run scorer for the two-time IPL champions with 36 but he took 37 balls to get to that mark before falling to Rashid Khan.

KKR’s top order struggled to get their shots away and by the time Andre Russell was dismissed off the last ball of the 15th over, the score was 105/4. Morgan and Karthik, however, shifted gears in the death overs. Morgan hit three fours and one six while Karthik hit two fours and as many sixes.

When SRH came in to chase, Kane Williamson joined Jonny Bairstow to open the innings. The two put on a very good partnership despite Williamson suffering from an injury. However, Ferguson charged in and in no time the openers were sent back.

David Warner and Abdul Samad managed to put on a good partnership as the captain led from the front. SRH needed 18 off the final over and a half-fit Andre Russell somehow managed to tie the game for his side. Warner failed to punish a leg-stump length delivery off the last ball of the game.

The excitement went up a million notches as the game went into Super Over, but it came crashing down at a rapid pace for SRH as they lost 2 wickets in 3 balls. Both sides had looked to be possible contenders for the fourth spot in the points table, but this win will do only good for KKR.