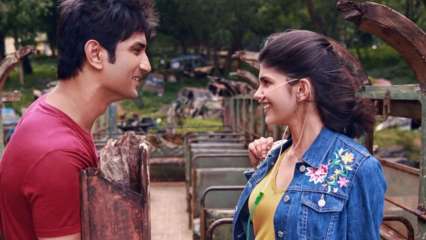 After the title track ‘Dil Bechara‘, the new song to be released from Sushant Singh Rajput and Sanjana Sanghi starrer film is ‘Taare Gin‘. As per music maestro AR Rahman’s earlier tweet, the song is crooned by Mohit Chauhan and Shreya Ghoshal. Now, ahead of the song release, Sanjana took to her Instagram page and shared the still from the film much to the excitement of the fans. In the still, she features with her co-star Sushant.

The photo has Sushant and Sanjana looking into each other’s eyes with all smiles. He is giving flirtatious look while she reciprocates the same. Sanghi captioned the photo stating, “Ek haseen mazaa hai yeh, Mazaa hai ya, Sazaa hai yeh? – Taare Gin, Dil Bechara @amitabhbhattacharyaofficial @arrahman”.

She added, “One of my absolute favourite behind the scenes moments with Sushant while shooting the scene you all love. Don’t know why, I just feel a little bit better every time I see this photograph. “Abhi Nahi, ya Kabhi Nahi? KABHI NAHI! Chal Jhoothi!” – @shashankkhaitan @suprotimsengupta @castingchhabra #SushantSinghRajput”.

Check out the photo below:

Talking about Dil Bechara, the film is directed by casting director Mukesh Chhabra making his directorial debut. It is Sushant’s final film and fans are eager to witness his magic on screen for one last time.

However, Dil Bechara is all set to be streamed digitally on Disney+ Hotstar. The movie will be available to subscribers and non-subscribers as a tribute to SSR from July 24, 2020. The film is based on Hollywood film The Fault In Our Stars which was adapted from John Green’s novel of the same name.

Maurizio Sarri has been sacked by Serie A 2019-20 champions Juventus...
Read more
English

Is Paytm ‘Binod’? Know all about Twitter’s latest viral trend that has sparked some hilarious memes