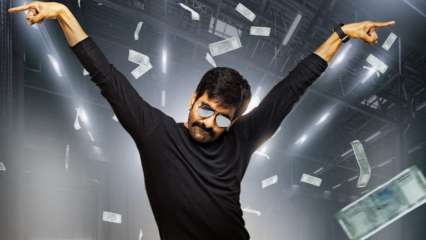 A few days after Ravi Teja resumed the shoot of his upcoming film Krack, the Telugu superstar announced a new project. Yes, the actor will be headlining a movie titled Khiladi. In the first look poster, Ravi is seen donning a stylish look wearing a black full-sleeved T-Shirt and jet black jeans. A pair of reflective sunglasses, oxblood belt and matching shoes completed his handsome look. Khiladi‘s tagline is ‘Play Smart’.

Check out the first look below:

Khiladi stars Ravi Teja in dual roles and also has Meenakshi Chaudhary and Dimple Hayathi as female leads. The film is directed by Ramesh Varma and produced by Satyanarayana Koneru. Khiladi is set to go on floors next month while the mahurat will be held on Sunday.

Meanwhile, talking about Krack, the film also stars Shruti Haasan as the female lead along with Varalaxmi Sarathkumar and Samuthirakani in pivotal roles. The film is directed by Gopichand Malineni and produced by B. Madhu under Saraswathi Films Division banner.

In 2019, Gopichand confirmed that Krack is an original story and not a remake. She said, “Our film, RT 66 with Ravi Teja is neither inspired nor a remake of any film. It’s an original story based on several true incidents that happened in the Telugu States. The film showcases Ravi as a powerful cop and we will start shooting on November 14 in Hyderabad.”

Fishermen from Rameshwaram in Tamil Nadu have alleged that they were...
Read more
English

Union minister and president of the Republican Party of India (A),...
Read more

Union minister and president of the Republican Party of India (A),...
Read more