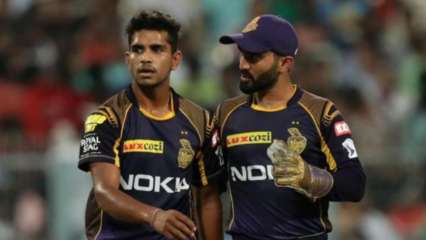 The first week of IPL 2020 is coming to an end, but it is rather surprising that two champion teams of the IPL have scored no points. Kolkata Knight Riders did not get their campaign off to a great start as they lost by 49 runs to the Mumbai Indians. Dinesh Karthik’s side have now lost 20 out of 26 matches in the history of the IPL against Rohit Sharma’s side. At the other end, Sunrisers Hyderabad did not start well and a collapse of eight wickets for 32 runs against the Royal Challengers Bangalore saw them lose the match by 10 runs.

Sunrisers Hyderabad have been dealt a big blow with Mitchell Marsh being ruled out of the tournament due to an ankle injury. For backup, David Warners’ side have roped in West Indies skipper Jason Holder as one of the replacements.

Kolkata Knight Riders also had some selection issues. Pat Cummins and Eoin Morgan were coming out of an extended quarantine and they struggled in the Abu Dhabi heat, with Cummins in particular leaking 49 runs in three overs. Morgan also struggled for timing and whether Dinesh Karthik will take them in the team for the clash against Sunrisers Hyderabad remains to be seen.

Where and when the IPL 2020 clash between Kolkata Knight Riders vs Sunrisers Hyderabad be played?

IPL 2020 clash between Kolkata Knight Riders vs Sunrisers Hyderabad will be played on September 26 and it will be held at the Sheikh Zayed stadium in Abu Dhabi.

How and where to watch IPL 2020 live streaming?

IPL 2020 will be live streamed on Disney+ Hotstar.

What will be the timings of the match?