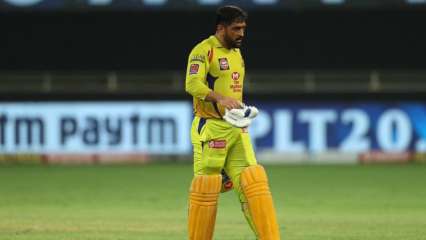 Chennai Super Kings had restricted Sunrisers Hyderabad in the first innings of the IPL 2020 clash at the Dubai International Cricket Stadium. After 16 overs, Sunrisers Hyderabad were 111/4 and it looked like they could not cross 150. However, Sam Curran conceded 22 runs in the 17th over which included a crucial no-ball for height. In the 19th over, Ravindra Jadeja and Shardul Thakur dropped catches of Abhishek Sharma in two consecutive deliveries as he and Priyam Garg notched up a solid partnership. The 77-run stand yielded 53 runs in the last four overs and Sunrisers Hyderabad had a total to defend against MS Dhoni‘s Chennai Super Kings.

Chennai Super Kings tried but once again left it a bit too late in the chase as they ended up seven runs short to suffer their third consecutive loss in IPL 2020. Speaking after the match, MS Dhoni lambasted the lack of ‘professionalism’ in the side and said one cannot drop catches and bowl no-balls.

“Long time back once we lost three in a row. We need to get a lot of things right. It is the professionalism. We need to take our catches not bowl no-balls. Those are the controllables and maybe we are getting too relaxed. We have been a bit too relaxed at times. After the 16th over, we had two good overs but overall we could have been slightly better. Nobody wants to drop catches but at the same at this level, we need to draw a line and take these catches especially when the team hasn’t been doing that outstandingly well. It is very important to be at your best,” MS Dhoni said.

Chennai Super Kings once again made a poor start as they were reduced to 42/4 in the ninth over. However, Ravindra Jadeja and MS Dhoni shared a superb partnerships of 72 runs, with Jadeja scoring an aggressive fifty. The Chennai Super Kings skipper then tried to unleash his finishing qualities but Sunrisers Hyderabad held on despite an injury to Bhuvneshwar Kumar in the 19th over and having to bowl the final with part-time legspinner Abdul Samad.

MS Dhoni tried running ones and twos hard and the heat in Dubai took a toll, with the former India captain struggling for breath and down on his haunches.

“I was not able to middle a lot of deliveries. Was trying to hit it too hard. When the wicket is slightly at the slower side, it is better to time it. Looking at outfield it was subconsciously coming to us to hit the ball hard. Tried to get as much as time as possible. It is quite dry out here. So, the throat gets dry and you start to cough. When you have legal signs, you can take some time off,” Dhoni said.

Chennai Super Kings’ next encounter will be against Kings XI Punjab at the Dubai International stadium on Sunday and they must win the match in order to stay in contention for the top four which is already looking intense.

Many people do not check whether the LPG cylinder subsidy money...
Read more
English

Many people do not check whether the LPG cylinder subsidy money...
Read more

Many people do not check whether the LPG cylinder subsidy money...
Read more

Did MS Dhoni take a dig at Suresh Raina after Chennai...

IPL 2020: Sunil Narine placed ahead of Morgan gets Yuvraj, Stokes...