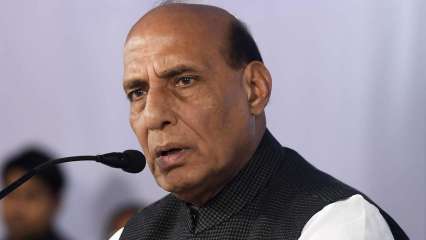 Defence Minister Rajnath Singh is scheduled to meet Chief of Defence Staff General Bipin Rawat and the three service chiefs to dicuss the current military standoff between the Indian and Chinese troops along the Line of Actual Control (LOC) in Eastern Ladakh today.

The meeting will also focus on the overall security situation of the country.

On Wednesday, the Indian and Chinese troops completed the disengagement process at patrolling Point 15 and the Chinese troops moved back by approximately 2 kilometers, according to Indian Army sources.

The disengagement process between the two sides at Hot Springs and Gogra began on Monday, Army sources had said.

The Chinese Army had started dismantling its structures since Sunday, sources said.

The Special Representatives of India and China on the Boundary Question — Ajit Doval and Wang Yi— had a ‘frank and in-depth exchange’ telephone conversation on Sunday during which they agreed that both sides should complete the ongoing disengagement process along the LAC expeditiously, according to a statement by Ministry of External Affairs released on Monday.

They re-affirmed that both sides should strictly respect and observe the LAC and should not take any unilateral action to alter the status quo and work together to avoid any incident in the future that could disturb peace and tranquillity in border areas.

National Security Advisor (NSA) Ajit Doval is personally monitoring the India and China border situation continuously with the Indian Army and the standoff between the troops of two countries is expected to be resolved amicably soon, government sources said.

The situation at the India-China border became tense after 20 Indian soldiers lost their lives in a violent face-off in the Galwan valley on June 15-16 when Chinese troops attempted to unilaterally change the status quo during the de-escalation.

Fans have been eagerly waiting for BLACKPINK to announce the American...
Read more
- Advertisment -